In a statement issued, the Joint Action Committee for Social Justice alleged that police, Rapid Action Force (RAF), Central Reserve Police Force (CRPF) and other security personnel unleashed a brutal physical and sexual assault on students and teachers, on campus.

From their website: “Following the incidents of caste discrimination and social exclusion which lead to the “institutional murder” of PhD scholar Rohith Vemula student community has come together to constitute itself into The Joint Action Committee for Social Justice (UoH).”

“Women students were beaten and grabbed by male police officers. After the forcible eviction from the lodge compound, police chased us for another 2 km, and grabbed and arrested students. Students suffered grievous injuries and were taken to hospitals,” the statement said.

Here’s a video of police action in University of Hyderabad campus on protesting students. 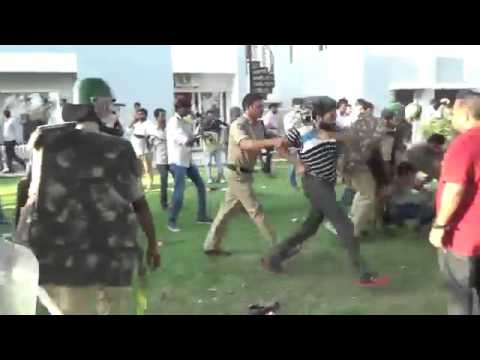 It said 36 students, including three professors were picked up, brutally beaten in a police van, and detained in unknown locations all night. The JAC also said Appa Rao, the vice-chancellor had provided the list of students and faculty to be picked up to the police working with ABVP and some students and faculty who helped him return to the university as vice chancellor after Rohit Vemula’s suicide.

26-year-old Rohith Vemula, who hanged himself in Hyderabad Central University campus in January, was suspended from his hostel in August last year for allegedly attacking an ABVP leader.

Hit the reply button below to register your opinion on this. Do you think students should be allowed the right to free speech and protest peacefully without unleashing violence on them or without the fear of arrests on false charges?

ICF is a community promoting discussions on intellectual and cultural topics. You will join us if you appreciate free, civilized, passionate conversations.